Imagine finding this on the 29th November. I was sent out to deal with a supposed wasp nest, and to be honest thought it was going to be a waste of time. Knocked on the door of the lady who had called us out and was told it was in the tree at the bottom of the garden and to go on down and have a look. My jaw dropped when I saw it. Problem; I had arrived late in the afternoon and it was getting dark, plus there was a frost due overnight.

For those not in the “know” it it is very unusual to find honey bee colonies out in the open in the UK like this, yes we come across them in trees, chimneys, wall cavities but rarely out in the open like this, especially of this size this late in the year.

So I proceeded to pull out the bee collection kit (I was carrying an undersized bee vac box, one of those crappy boxes found on ebay) and set it up along with a step ladder etc. In my rush I had forgotten to take any photos – so I snapped off a few, not realising the camera was set to macro, so I apologise for the shots (I had promised myself that I was going to find time to take decent photos of our work for the website – so much for that). You could feel the temperature dropping and the light going so I figured I would just get on with the removal of the honey bee colony.

When I got up close I found I had 9 combs to deal with, the main combs being about a foot wide by  about 18″ in depth. The top of the colony had an umbrella like look which appeared to offer protection from the rain over the brood and cluster areas. Wish I had spotted this earlier and taken a photo from above the colony. It was interesting to see the bees clustered around the outer edges and front comb considering the chill in the air. It was also surprising at how well the colony structure stood up against the weather,the photos are taken  from a position looking down the valley towards the exposed honey bee colony in the tree, so the first comb was getting the brunt of the wind and the rain.

Removing the colony took longer than expected (must admit to being somewhat precious about it, and we were on a fixed price anyway). Luckily I had some shears in the van to cut the brambles and branches poking thru the comb structure. These branches reinforced the structure making it very sturdy and tough, clever bees. On the 3rd or fourth comb in I came across capped brood, larvae and eggs which were placed into a nuc box with some bees ready to be reunited with the remainder of the bee colony in the vac box in the morning. The next comb had more brood which also went into the nuc box, it was then just a question of collecting all the remaining bees and cleaning up.

Satisfaction guaranteed, one happy customer and a happy re-homed colony of bees. 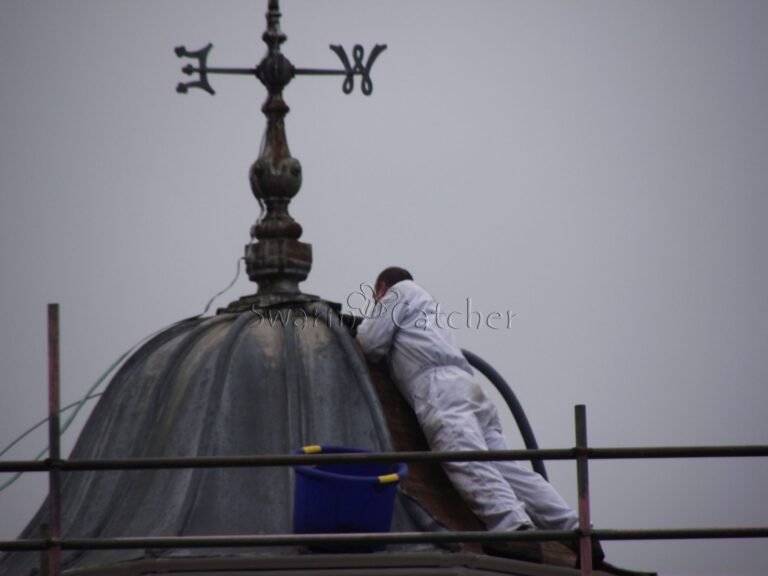